Storyland in New Orleans City Park has been a favorite place for kids and adults. This beloved New Orleans attraction has been a part of our hearts for 60 years and it has not been updated in nearly 35 years. Talk about a long time coming!

STEM-related activities, increasing ADA accessibility and becoming more inclusive were among the primary goals for the $800,000 upgrade.

This revitalization comes just in time for Celebration in the Oaks which opens this week!

What Upgrades Were Done TO Storyland in New Orleans City Park?

Updates to old favorites, like the Puff the Magic Dragon slide, and four new additions breathed new life into this historic attraction, which was recently named one of the top family activities in New Orleans.

One of my favorites was the upgrade to the Gingerbread Man, who received an interactive Candyland game!

Don't forget to slide down the beautifully restored Puff the Magic Dragon slide and then make your way to stop by and visit The Little Mermaid. You can steer your own pirate ship in the grotto and strike a pose as a mermaid or merman!

What New Exhibts Are at Storyland in New Orleans City Park?

The four new exhibits include Boudreaux the Zydeco Gator, Humpty Dumpty (complete with large blocks to build Humpty's wall), The Tortoise and the Hare, and Jack and the Beanstalk.

Where is Storyland Located?

Storyland is located inside of City Park by the Carousel Gardens.

When Is Storyland in New Orleans City Park Open?

What is the cost of Addmission to Storyland in New Orleans City Park?

Be sure to let us know which exhibit is your favorite 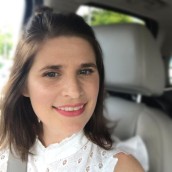 Noele is native New Orleanian, whose husband somehow convinced her to move to Metairie, where they currently reside with their four children, Kaitlyn (13), Aidan (10), Abigail (7) & Wyatt (16 months), two dogs, and tortoise. She works full time as a Paralegal at a small, personal injury law firm. When she's not working or carpooling her kids around the city and trying to manage the family calendar, you can find her enjoying a glass of wine while cooking for friends and family. Greek Fest, Bayou Boogaloo, and the beach are her happy places. She is a self-proclaimed hot-mess mama who also enjoys reading, writing, and exploring the GNO area.

Delicious Recipes To Use Up Your Thanksgiving Leftovers

Scroll To Top
We use cookies on our website to give you the most relevant experience by remembering your preferences and repeat visits. By clicking “Accept All”, you consent to the use of ALL the cookies. However, you may visit "Cookie Settings" to provide a controlled consent.
Cookie SettingsAccept All
Manage consent

Any cookies that may not be particularly necessary for the website to function and is used specifically to collect user personal data via analytics, ads, other embedded contents are termed as non-necessary cookies. It is mandatory to procure user consent prior to running these cookies on your website.

Get notified about exclusive offers every week!